So, it's been a bit of a dry spell on the painting front, as summer tends to get in the way of sitting inside all day and painting, but I've finally finished a small(ish) warband project I've been working on occasionally for a while now. 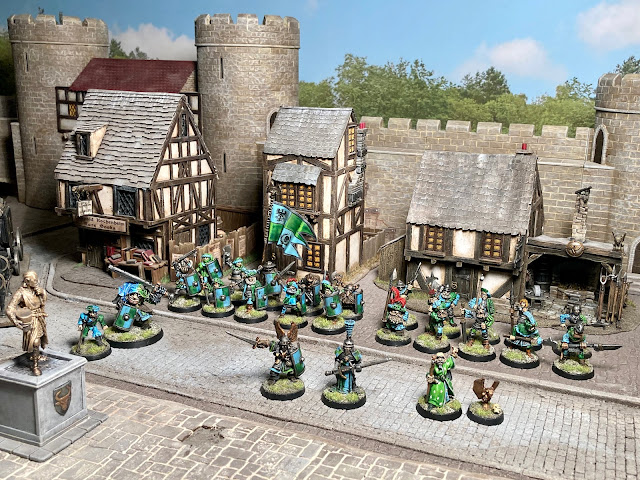 The D'Oberocs mustering their company on the main Altheim square

More photos after the cut... 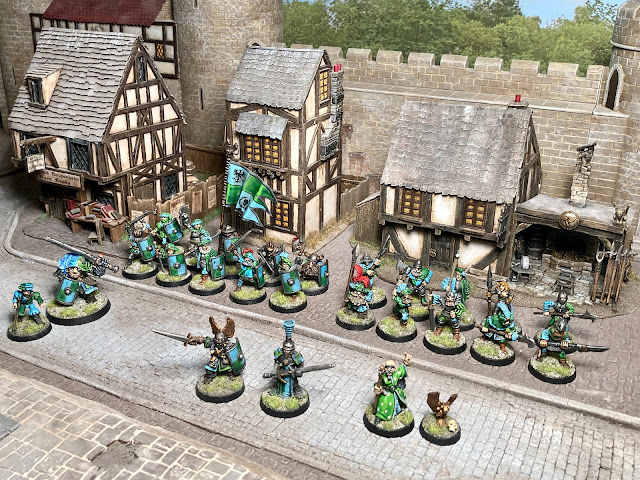 The D'Oberocs mustering their company on the main Altheim square

The D'Oberoc Company are led by the D'Oberoc brothers, Lando and Till, a pair of displaced minor nobles. They operate in Nordland, primarily being hired by cities such as Altheim to keep the roads free of bandits and other, more dangerous problems. 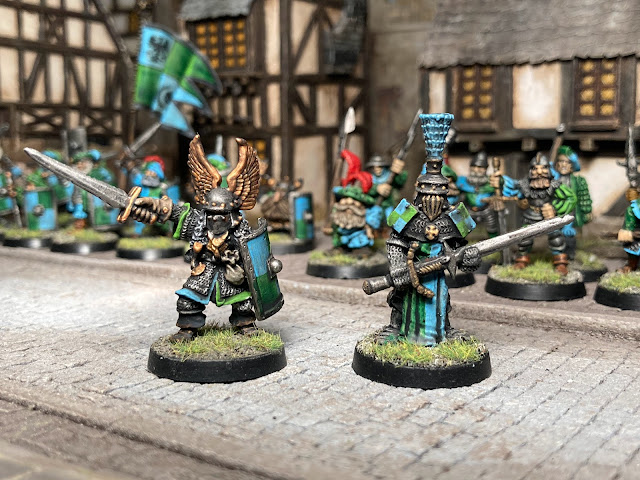 Lando and Till D'Oberoc

After losing their ancestral lands several generations ago due to a nefarious plot, the D'Oberoc family ended up residing in their small mansion in Altheim, and have to earn their living these days by running a mercenary company. 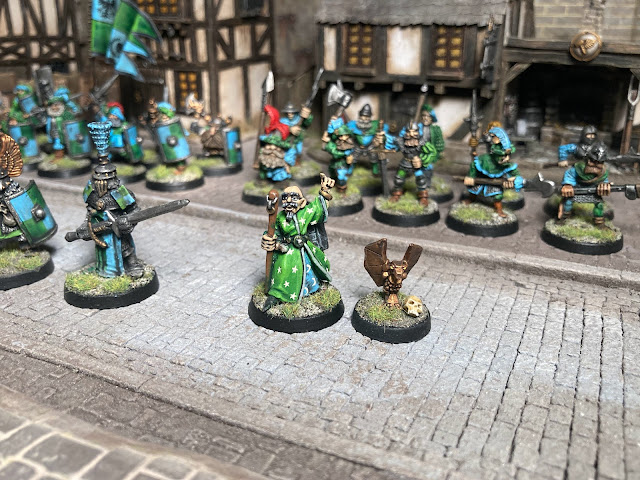 Johann Dei and his mechanical flying contrivance.
As well as his magical powers, he has a flying 'Mechanical Contrivance' to help him. The result of his own magical powers combined with dwarvish engineering, it can fly high above the Nordland forests and allows him to see through its 'eyes'. This allows the company to sneak up on any potential bandit camps without them knowing.
The main strength of the company are two units of infantry, each commanded by one of the brothers. The company is happy to accept soldiers from any race or sex as long as they are competent and experienced, and to that end there are several dwarven members, a few female soldiers and even a halfling!
The first unit are Lando's Zweihanders, all of whom are armed with two-handed weapons of one sort or other: 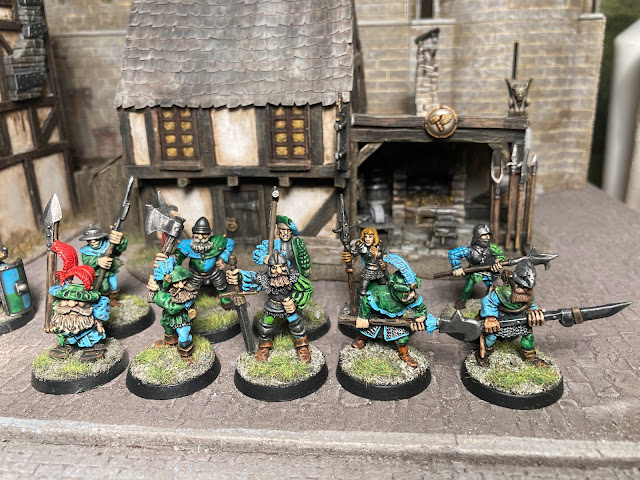 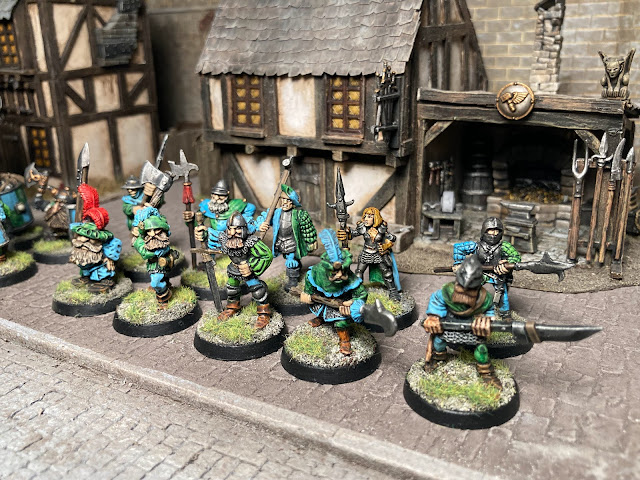 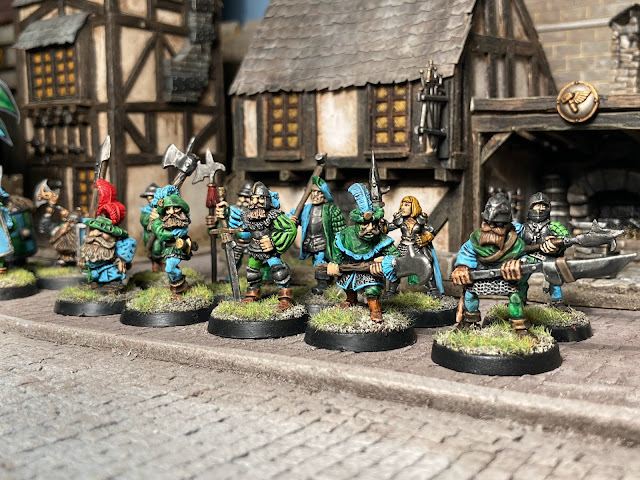 The other unit are Till's Swordsmen. Armed with a hand weapon and a company supplied shield, they make up the veterans of the company, and are tasked with protecting the company colours. 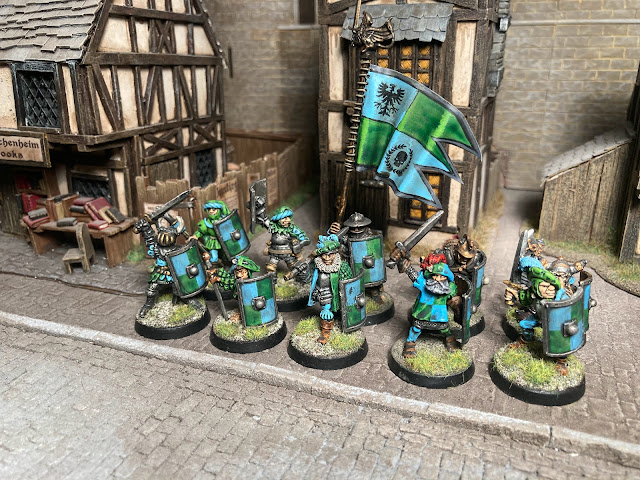 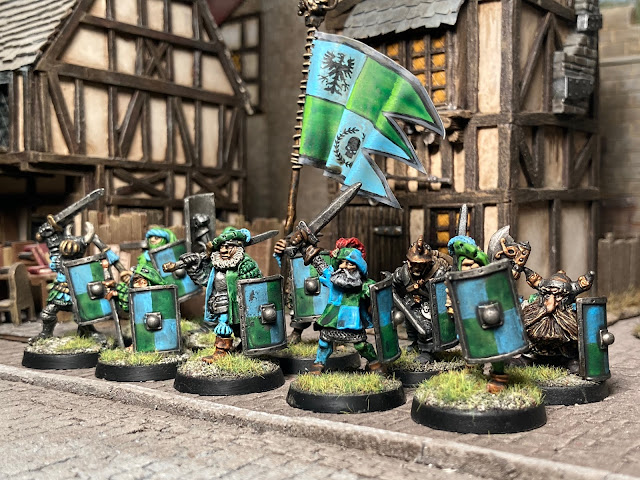 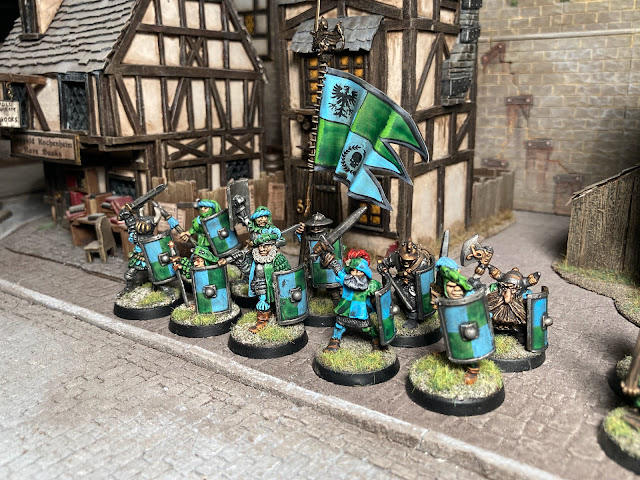 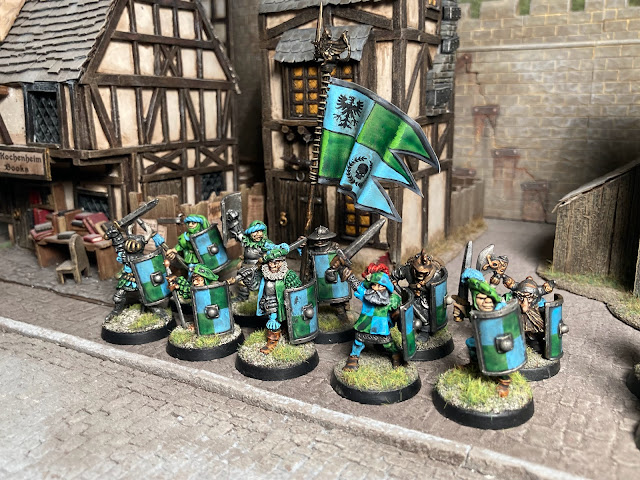 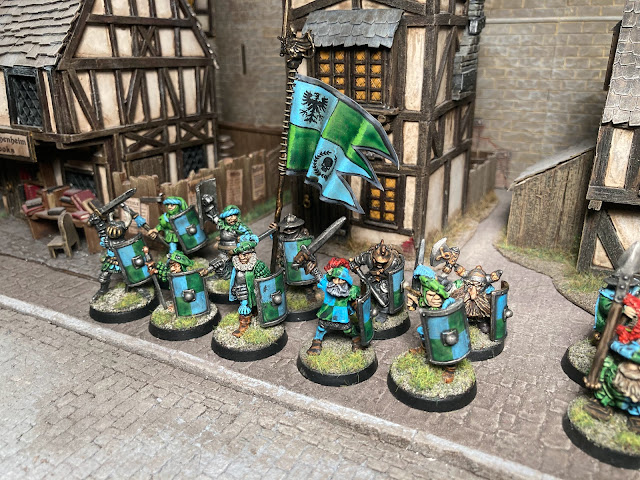 As well as their two units of militia, they also have the help of 'The Twins', consisting of Dale, a former shepherd and Chep, an ogre. 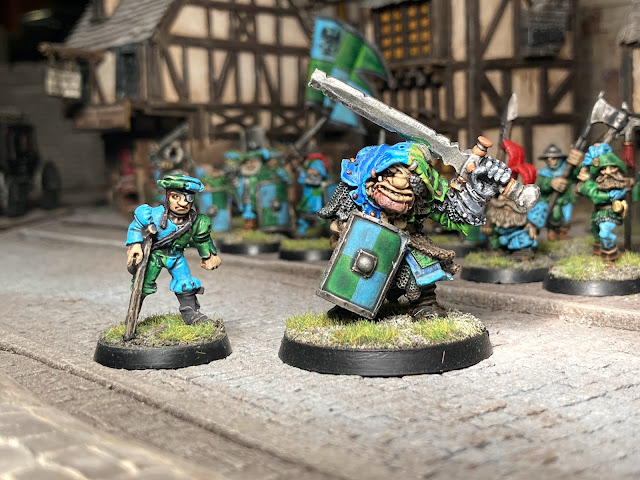 Dale was previously a member of the company before being badly injured during a battle and invalided out to a D'Oberoc farm to look after the livestock. Tending his sheep near the forest, he found an ogre wandering in the woods, dazed and badly injured. He nursed him back to health and in return Chep is incredibly protective over Dale and does whatever he asks.
Sensing a way to return to the company, Dale spoke to the Brothers, and after some discussion and a few trials, the pair now work with the company, with Chep providing heavy support under Dale's instructions. 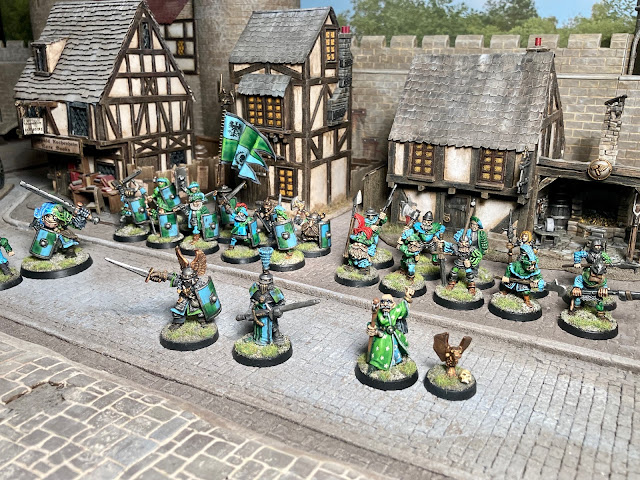 So, there you have another small project finished! I really enjoyed these guys, and I have a couple of small units to add to them at some point when I get those finished. This was really just a project to paint up all the fun old Citadel Fighter models I've had knocking around in the bits box forever, I originally only meant to do a small Mordheim warband, but the whole thing got a bit out of control!
Posted by Evo Von Himmel at 10:18

Evo Von Himmel
40-something wargames fan, and long term GW/Citadel collector, going back to the early 80's. Spent a couple of years in the late 80's/early 90's working for GW but managed to escape with only 1D6 SAN loss.