So, related to my previous post about the Nomad exploration vehicle, next up is Carl, a Nomad guide, and his Mark XIII servo skull:

Carl is a mysterious, almost legendary figure, a Nomad 'Zone Tripper'. He travels the most dangerous areas of the Ash Wastes with his Mark XIII servoskull, searching out the hidden locations of salvageable artifacts. He takes what he can carry back then sells his services as a guide to other Nomads of the Scrapper Guild, so they can then strip out the rest of the salvageable items for recycling and sale.
More photos and background after the cut...
So, here's a couple more pics of the pair: 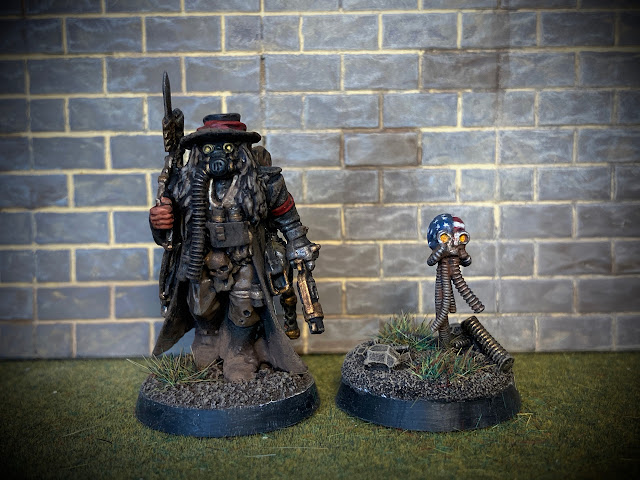 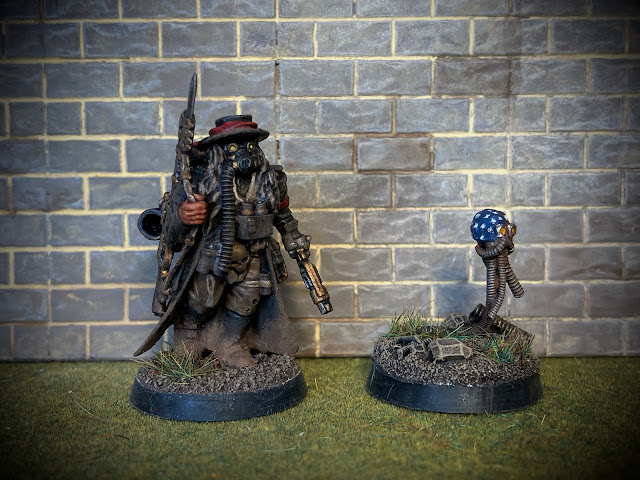 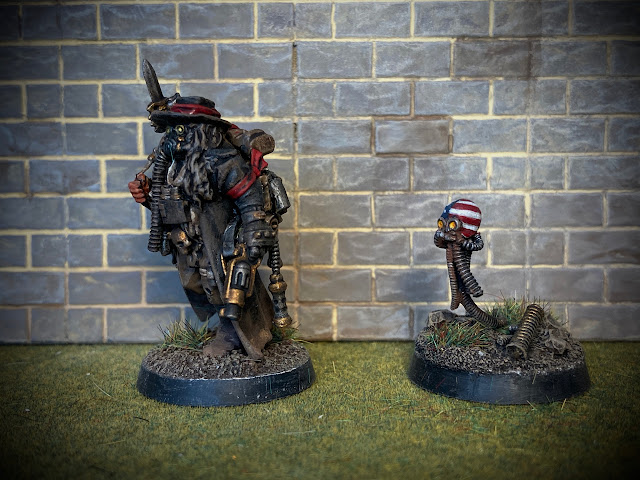 As some of you will be well aware, Carl is based on the 'Zone Tripper' from the 1990 film 'Hardware'. 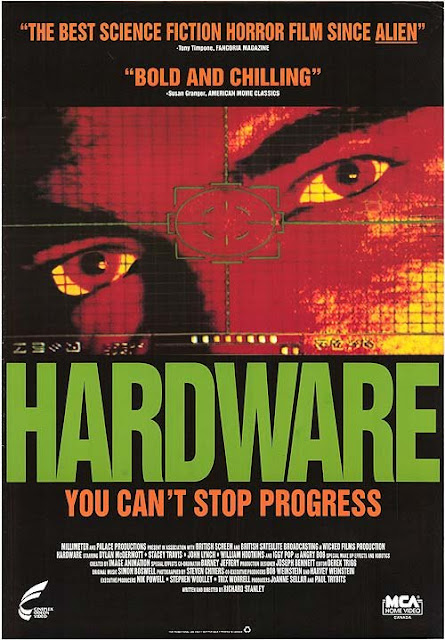 This is really and truly one of my favourite films of all time. Not only for the story (loosely based on a 2000AD comic strip), the cast (Carl McCoy, Lemmy, Iggy Pop!), the soundtrack (Ministry, PiL, Iggy Pop, Motorhead, Rossini!), but most especially the background flavour to the film.
It's based in a post-apocalyptic cyberpunk hellscape, where a nuclear war ('The Big One') devastated whole swathes of the planet, and the Zone Tripper (played by Carl McCoy from the band Fields of the Nephilim) searches these nuclear deserts for artifacts to sell on in the city.
It's really not a huge stretch to pull this into the 40k universe, and especially the Ash Wastes around the Hives. Anyway, the model Carl is based on is the Zone Tripper mentioned above. Here are a few stills: 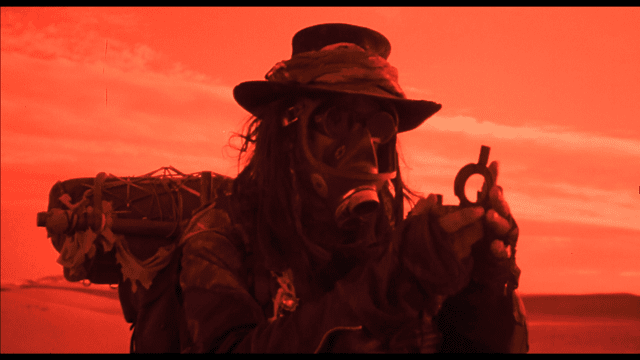 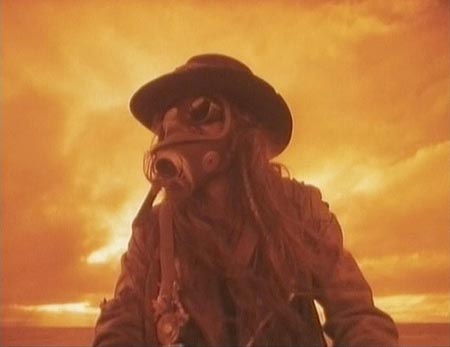 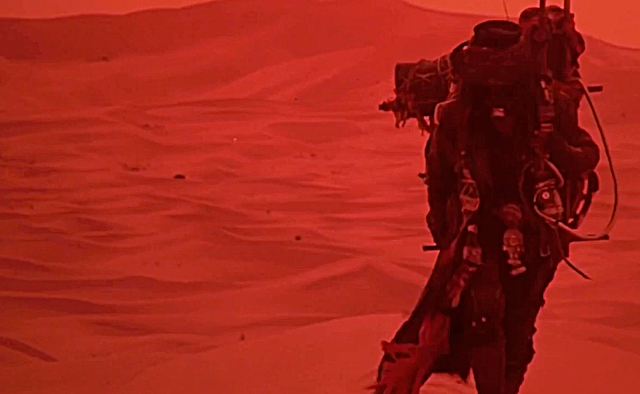 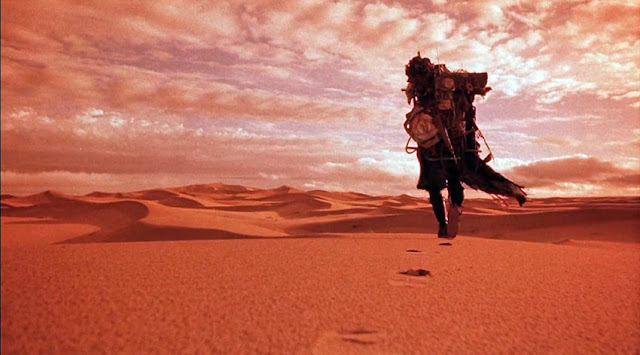 Unusually for me, I've got a WIP photo too: 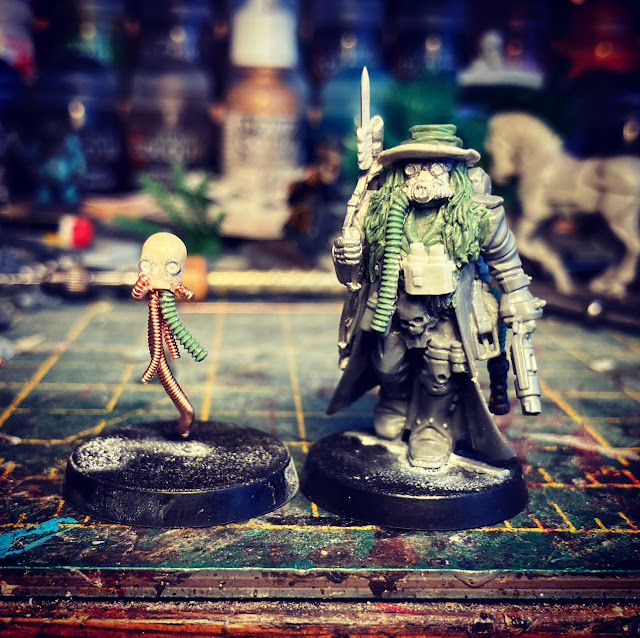 He's based on an Orlock ganger body, but the rest of him is mainly assorted stuff from the bits box and greenstuff. The rifle is from Victoria Miniatures, as is the respirator and goggles. I gave him a rifle and pistol, as I wanted him to be useful in combat as a hired gun, rather than just being a scavenger as in the film. Paintwise, he's quite simple, dark, dirty and loads of weathering. I really wanted him to look like he lived outside in the hostile environment of the Wastes.
The servoskull is also based on the film, this time based on the head of a M.A.R.K 13 combat robot the 'Tripper finds and sells on, which eventually ends up self-repairing itself before attempting to continue it's programming, i.e killing everyone it sees:
Modelwise, it's just a skull from the Heroquest boxed game, with lenses added, and some noodly appendages made of twisted wire added on, and that's about it.
Did I mention I was obsessed with this film? Just in case you were doubting me for a moment, here's a version of Carl I made in 1990 when the film first came out and I was working at GW. I think this may even have got used for playtesting the original Confrontation rules in 1991! 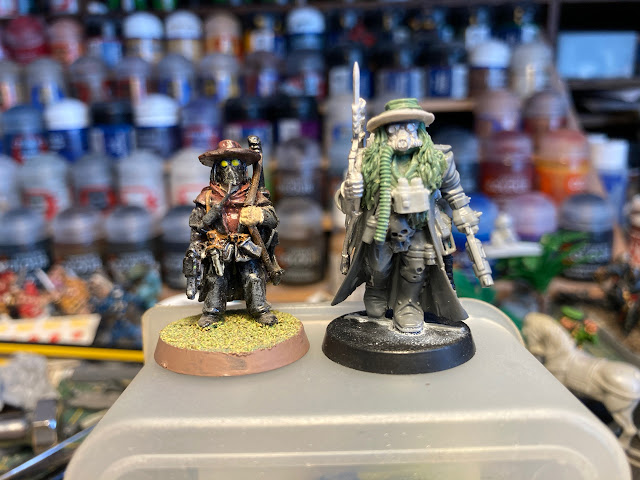 Man, check out that terrible basing. Not to mention the scale creep!
Anyway, even though it's 30 years old now, I won't spoil the rest of the film in case you haven't seen it. If you haven't, I'd recommend it, and if you have, watch it again, it's great!
Until next time!
Posted by Evo Von Himmel at 10:45

Evo Von Himmel
40-something wargames fan, and long term GW/Citadel collector, going back to the early 80's. Spent a couple of years in the late 80's/early 90's working for GW but managed to escape with only 1D6 SAN loss.